Thank you! And, unfortunately, he doesn't fall in love with the player, he just has fun teasing them.

im a tad confused. how exactly dose one start playing the game?

Hi, did you download the game for Windows (PC), Mac, or Linux? For Mac, you should be able to just double click and play.  For Windows, you'll need to unzip the folder first.

Please note that this game will not work on mobile or Chromebook.

ah- i did- ill try again and see if that works

Thank you for playing!  Dave did a fantastic job with voice acting.  To answer  your question, there's only one ending.

Can this be played on mobile??

No, this is for Windows, Mac, and Linux computers only.

How do I get the rough kiss lol- I never thought id say that sentence.... But how do I unlock it XDDD

LOL After you ask for the rough kiss, you have to provoke him repeatedly until he does it  >:)

define provoke in this context.... I cant press kiss... So do I press fight-? haha

Oh no no, the "Provoke" button is the ACT menu!  It's right next to the dithered out "Kiss" option and under the "Talk" option.  :)  Press it a few times and you'll see. 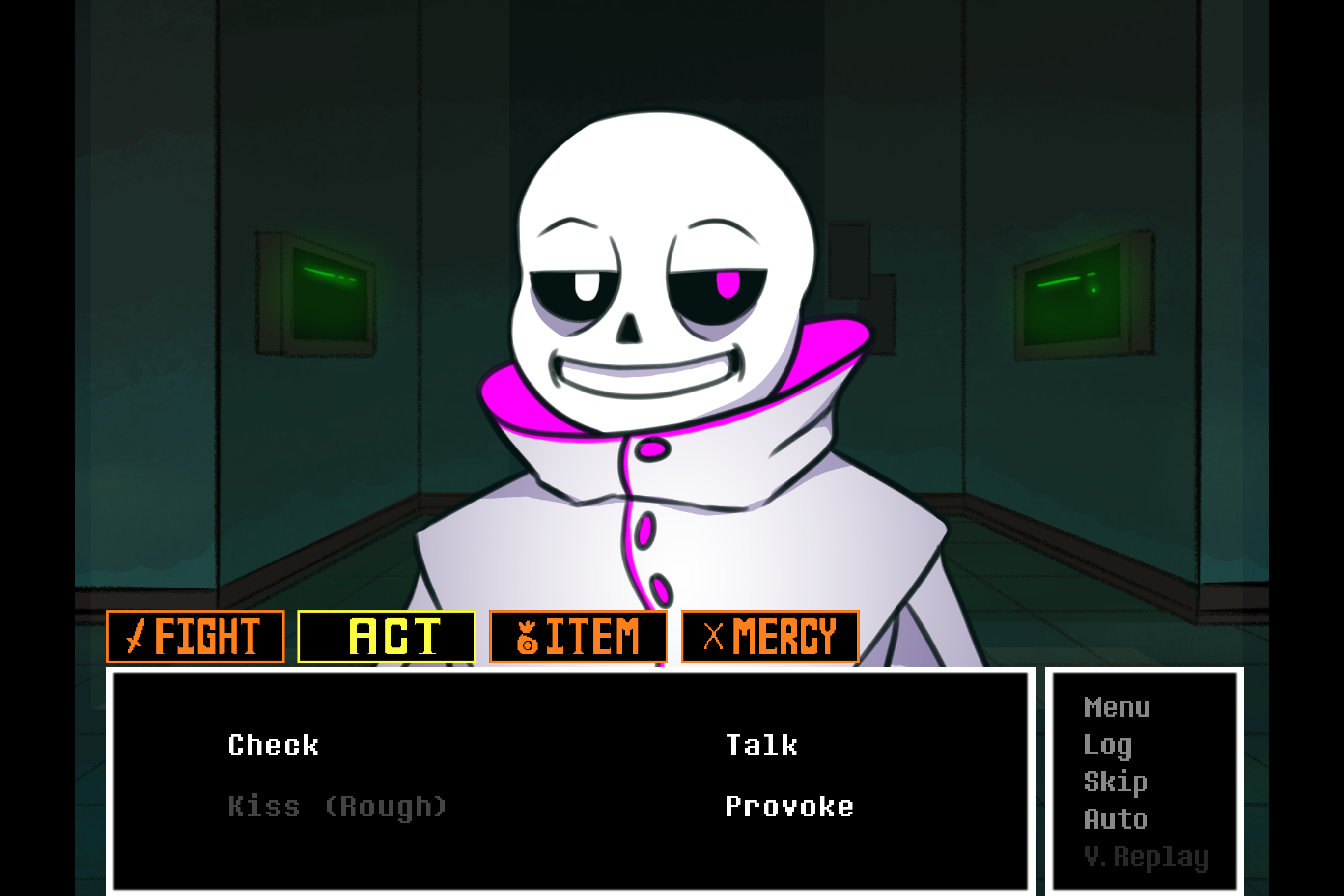 ok, I am so confused. Where do I start the game? Like I do not see a start button. How do I play the game :,(

The "Recall" button will start the visual novel. 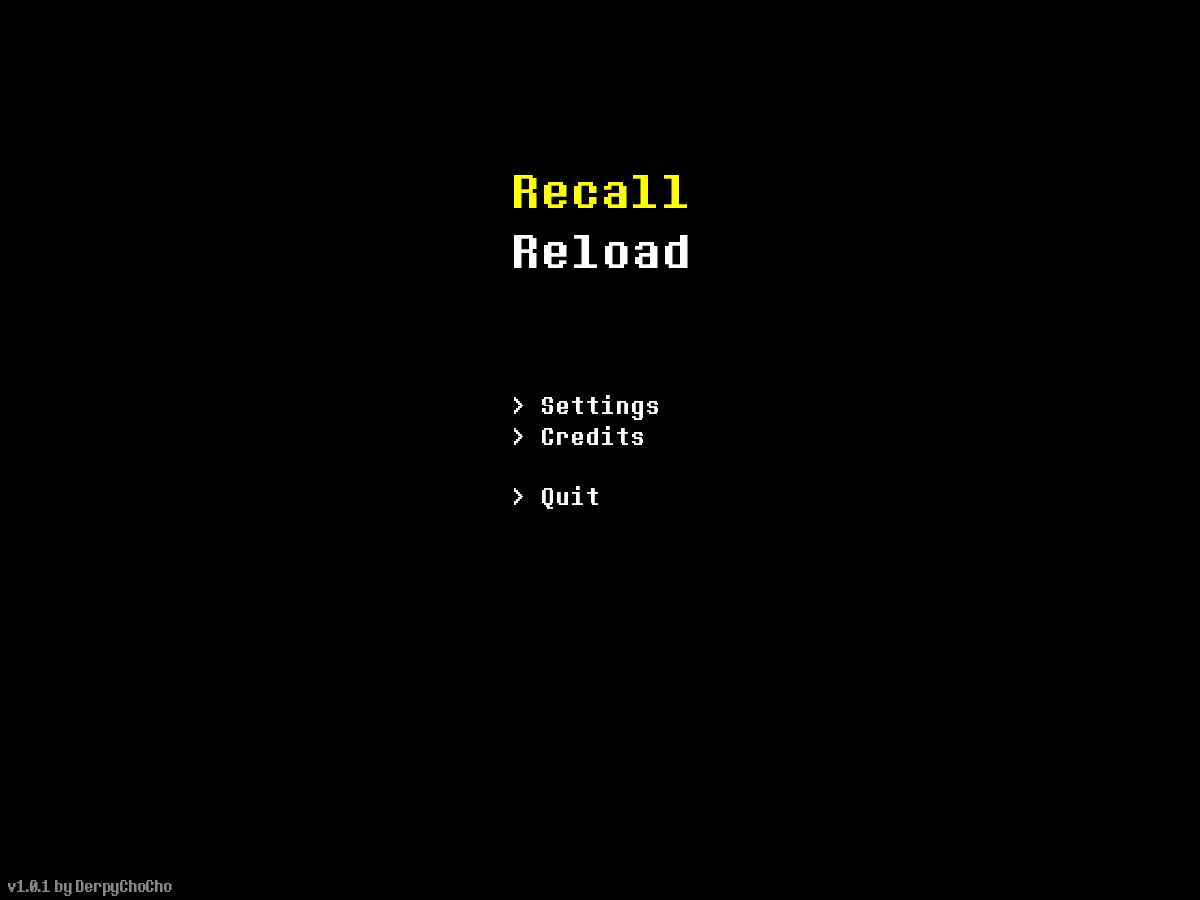 Thanks, but I don't see the Recall button either :( What am I doing wrong?

Let me ask a few questions to better troubleshoot.

2.)  Were you able to download the game onto your computer?

3.) If using Windows, after downloading did you unzip the folder before trying to run the game?

Please note: This can only be played via download. This is not playable on the website or mobile phones.

I did some research because I am using a Chromebook even though I downloaded the game it's basically registering me as a browser; therefore, I cannot play your game.  Although I do appreciate you taking time out of your day to reply.

This is already the full version! This was just a small visual novel to experiment with some features in Ren'Py.

Oh sorry I thought it was a demo

I'm glad you enjoyed it! Thank you for showcasing the VN!

Can I get I on my phone

Sorry, this was only developed for PC.

i played thru this game a a little bit,, havent finished it yet,,, but i absolutely love the voice acting!! and the things that happen when you try to close the game,, super interesting touches!

Thank you! Glad you're enjoying the voice acting!!  ^^  I'm super happy I cast Dave!  And I'm glad you like the little touches!  There was definitely a lot of experimenting (haha) while making this!

I know im a little late to the party (my wifi sucks so i only just managed to get this to download), but i absolutely loved this! The art and story are phenomenal, and I love the voices for Baggs and General Pap! Y'all did a great job and tbh, my it's my fav game now x'3

One thing tho, is there actually a way to load and stuff, or is that just there to kinda show how the player cant really actually do anything like another commenter mentioned? Or is that for maybe some kinda future thing, if you ever decided to add to this?

The only place you can save and load is during the part in True Lab.  Once you reach the Lab where you meet General again, you can't save/load.  And, you're right.  Losing the ability to save/load, the single ending, and not being able to tell General the truth at the end... those are all ways to convey to the player that they're not in control of this world.

This VN was definitely "just an experiment" (lol) for me to try new things with Ren'Py.  I probably won't be adding to it, unfortunately.  ^^;

To start, I loved it!  I loved everything about it, though I do have a few questions if that's okay?

So, I've gotten most of everything I think I could find, including the "Main Menu" turning into "Snap out of it", the little clip of Baggs asking the player to save him, and I've stayed at the Obey options screen for an hour just to see if you could wait him out like in the Undertale Genocide route.

I was wondering if there's a way to open the option about telling Papyrus that Baggs hypnotized the player?  I'm not sure if I'm missing something or if it's truly not just in the game :'))

Thank you so much!  And I don't mind questions at all!!

There isn't a way to unlock the option to tell Papyrus, unfortunately.  That option is really there to convey just how futile trying to take control in that world is.

However, there is a way to convince Baggs to roughly kiss you! You actually won't get to select it... but it happens through another option.  Once "Kiss (Rough)" appears, then you have to spam "Provoke" in order to, ahem, convince him.  And he'll take it from there.  ;)

Funnily enough I found the way to the rough option just before seeing this XD  Thank you so much though!  I love your games, can't wait to see more if you have some planned!

waitwaitwait, you can get Baggs to ask you to save him? [insert eyes emoji here] VERY curious how you managed that, if you (or Cho, if you see it first!) would be willing to offer a hint? I'm assuming it's something more than going down the straight Talk path?

Try showing him some MERCY.  ;)  And be persistent.

I'm not one for interacting with Undertale AUs much, but having been replaying Dating Start! recently, how was I going to see that you made another game and NOT play it? And I'm super glad I did! Hope you're ready for another long review because HERE WE GO.

First things first, the collaborators: one other aspect that made me pause initially was the voice acting. I'm too used to the voices that I hear in my head when I read the dialogue, so I wasn't quite sure how I'd take to actual voices playing! But Dave did a fantastic job; the almost ASMR quality of Dave's performance as Baggs adds a new dimension to the idea of the hypnosis. He's also a very charming Papyrus, capturing his energy and keeping in a good strike zone between being too loud/overbearing or too subdued.

And of course, major credit to megalommi for making the AU and allowing this to be brought to life, and also for the design taste. I'm an absolute sucker for neon colors so the blue and magenta activate my brain in the best way lol. (It's me, I'm the most susceptible to Baggs' influence on aesthetic alone.) More than that, it's a great take on a Sans who decided to do the MOST rather than waiting til the last second.

On the game itself, the new mechanics implemented are SO fun and were such a surprise when I first saw them. I know coding can do a lot, and I'm not a newbie to interface screw, but I was definitely taken off-guard by having my cursor being taken out of my control like that! The atmosphere and art that went with it were superb as well. Your CG perfectly captures a feeling of terrible triumph on Baggs' end, A+. It made it all the more rewarding too when I finally managed to squeeze the second lie in past his control, even if it was a petty gesture at best. The flavor is what makes it!

I've gone down all three main 'paths', and it's hard to figure which I favor more, Talk or Provoke. Provoke is fun purely because, well, again, being able to fight back even if it's futile is great! I'll admit I sat at the total obey screen for like, 15 mins seeing if I could wait Baggs' patience out for one last petty show of resistance lol. Meanwhile, Talk offers a lot to chew on. Seeing Baggs' eye go back to normal is such a nice little spark of hope right before it's snatched out from under you. On the other hand, and I'll admit this part is more likely me overthinking, but, well. You look at Baggs talking about humans abusing their new power and how close you get to Talking him down, and you wonder if there's something a lil more going on. Especially when the MC specifies control at the end of it... it's an interesting choice of wording to me. (Or maybe Baggs is too in MY head lmfao)

Thanks for bringing another fun experience to life!

The funny thing is, I don't dive into Undertale AU stuff myself XD  But the ideas and inspiration I got to mess around with the new version of Ren'Py were too powerful!  I just HAD to!  :D

I'm absolutely thrilled I was able to cast Dave!  His performance is outstanding and I absolutely agree with all your points!  And Mmi's design for Baggs is so fascinating to me! I love her use of shapes and colors!

I'm glad you liked the CG!  I had too much fun trying to figure out how to animate the static circle images within Ren'Py itself.  And congrats on managing to force the lie the second time!  Kinda makes me wish I put a silly little achievement there LOL

Talk is definitely the deeper of the options!  And when the MC specifies control, it's open to interpretation.  I like to see it as the player just saying that they can handle everything and that they're willing to assist. But it can also have other connotations, too.

Thank you so much for taking the time to write this review!  I never expect long reviews, but they are always always appreciated!!

Nice artwork, and I appreciate a fully voiced game!

I wasn't expecting to come back to itch.io after a month and be introduced to yet another amazing visual novel. (i also wasn't expecting Davetastic Dave to be in it :3) And OMG you've out done your self and even though i wish it lasted longer i really enjoyed playing it. :) also do you plan on expanding on this or just leaving it at this?

Thank you!!  I'm so thankful I was able to cast Dave for both roles!  Also, I don't plan on expanding this VN; it's pretty much a standalone as it is. ^^; This was mostly to experiment (get it haha XD) with the newest version of Ren'Py as well as some skills I haven't used before!  ^^  Each small VN hopefully prepares me for the larger projects in the future  :3

ITS A MASTERPIECE! You've done it again, I love the simple visuals and the mechanics of the VN! And beautiful Voiceover as expected to be Davetastic Dave! I think I've gotten every possible choices and paths, sadly there's only one ending but I did enjoy it nonetheless!

Thank you so much!!  Yes, sadly there truly is only one ending.  And it's mostly to add to the futility of trying to go against him in this world.  I'm glad that you enjoyed the VN!  :D

"This VN is not suitable for those adverse to flashing lights" That means me ;3; I was really loking forward to trying it! But I'm sure it's great! I hope everyone have fun!

I'm so sorry!  ;n;  There is a way to turn off the visual effects in the accessibilities option in settings!!  But, of course, better to be safe!

Oh! I just can't handle strong blinking lights! (I don't pass out or anything, just get really sick and dizzy) So if I can turn it of I can try!